There are a lot of reasons for which we do not want to keep our smartphones in our pockets while driving. Even if talking on the phone while driving is considered extremely dangerous, these days we tend to use a smartphone for many other activities. Up until a few years ago, people had to spend money on a dedicated GPS unit. Today, even the cheaper smartphones can serve as a GPS, stream music over Bluetooth to the car audio system or it can just be displayed to see the ID of a caller or various notifications. Some might argue that most cars have a built-in navigations system but we all know that there is nothing that can compete with Waze or Google maps.

The trouble comes from the fact that smartphones are fragile. Something like an iPhone 7 can get damaged even if it is dropped from a relatively short distance. A secure and reliable car iPhone 7 mount is a must. While there are no dedicated car mounts for the iPhone 7, there are a lot of compatible models. Their pricing is quite low for the most part but how secure they are can vary from one model to another. Magnetic ones tend to be less secure and pretty much any other type of mount should be safer to use.

For the sake of diversity, we did include some magnetic mounts that work with the iPhone 7 but the biggest focus has been on safety. With these things in mind let’s get right into our list of the top 10 best car mounts for iPhone 7 in 2022. 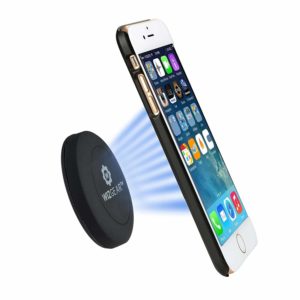 WizGear universal magnetic car mount is not specifically designed for iPhones but it does support them. It works with pretty much any smartphone due to its magnetic design. It is a compact product that works well for the the most part but it does not feel as secure as regular car mounts that can a more stable mechanism to secure the phone into place. It is a good pick but only in certain situations:

Pros
Cons
Even if it has a decent construction with a rubberized finish, it is not as durable as one would expect. The coating will come off in time, faster than anticipated. The system itself is fairly decent and much more convenient than regular car mounts. However, the use of a magnetic system does not mean that it will hold the smartphone tightly into place. It may fall off when stopping the car suddenly. 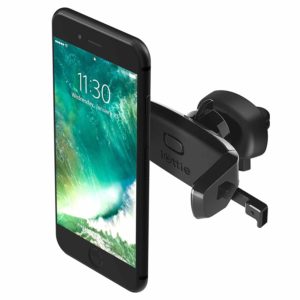 iOttie Easy One Touch smartphone holder was designed to keep the diver-focused on the road rather than keep his eyes down on the smartphone. It can be installed in the vents of the air conditioning system and it is fairly compact. Also, it works with all iPhone models and it is quite well made which explains why the mount is a bit more expensive.

Pros
Cons
Most car smartphone mounts use the vent blades but if the mount is too short, the smartphone will simply block the vent. This is not an issue during the summer but in the winter when the vents will push hot air, the air will be blown directly into the smartphone. The price should have been a bit lower but still, it is not a bad mount. It keeps the smartphone very secure in place and the locking system makes it very easy to install or take off the vent blades. 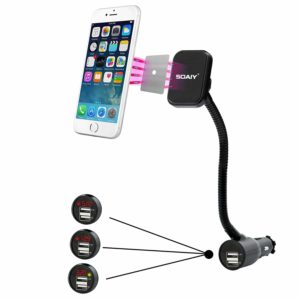 The Soaiy multifunctional car mount is a great pick for the ones that do not need something complicated. It does not look all that pretty but it serves its purpose quite well. Its construction makes it quite sturdy while the flexible next offers a bit more freedom in terms of adjusting it to a proper position and angle.

Pros
Cons
One issue that the mount has is the neck. It is not as firm as expected and will not hold the position when using it with an iPhone Plus. Another issue is the fact that it might not be visible to the driver since it is installed in the car lighter socket. However, this does offer a benefit. It can also charge the phone while holding it thus being a 3-in-1 product. The mount itself holds the smartphone quite tightly while the neck is fairly long. 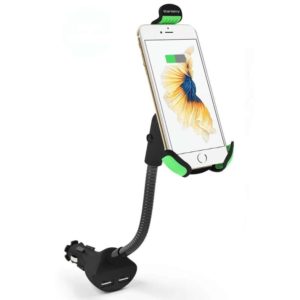 Vansky as a brand is not that well known but their products are quite decent. The universal car phone mount they made comes with an interesting design and a very solid construction. The interesting part is its dual functionality. It needs to be installed in the car lighter socket from which it draws power to charge the smartphone. It works with all iPhone models and it has a relatively decent price tag.

Pros
Cons
It seems that all car smartphone mounts that are inserted into the lighter socket have the same issue. Since the neck cannot be too long otherwise the weight of the phone will keep on bending it, the viewing angle and position will prove to be a bit out of reach. However, the added bonus that it works like a charger and offers a very secure hold count as major pluses. Unfortunately, the mount does not work with iPhone Plus models that have a case on. 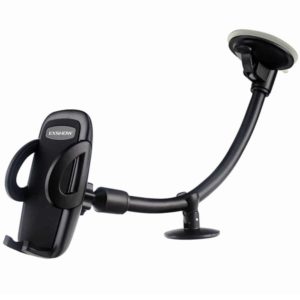 EXSHOW universal windshield long arm car phone mount is a simple device that was made to be stable and easy to use. The long arm and the double suction system makes it very easy to arrange the iPhone in a good angle and maintain the position. Even if it is made mostly out of plastic it feels sturdy and reliable.

Pros
Cons
For the most part there is very little to complain about the mount. It is a simple device and there is very little that can go wrong. The smartphone clamps that secure it into place are rubberized so that it prevents the phone from slipping and the suction cup is quite reliable. The only problem is the arm as it tends to shake a lot while driving. However, it will not change its position under the weight of the smartphone and it has no issues supporting an iPhone Plus. 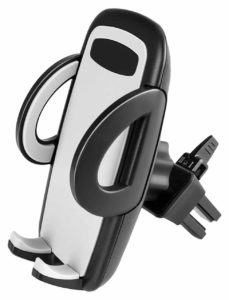 The BE universal smartphone car mount is one of the most inexpensive products in our list. It is very small and with a simple design. The smartphone is held into place with the aid of spring loaded clamps with a rubberized coating. Being an air vent mount means that installation is simple and it can be placed on the right side or left side of the driver.

Pros
Cons
This is a common issue for all air vent smartphone mounts as they expose the smartphone directly to heat. When the heat is on, it will blow directly into the battery of the iPhone. This means that using it in the winter might not be such a great idea. The mounting system is fairly simple and a click securing system to get it to hold onto the air vent blades. As for the rubberized coating, this will prevent the smartphone from getting scratches from vibrations. 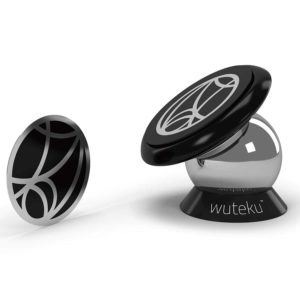 The Wuteku magnetic smartphone car mount is one of the more clever models. Magnetic car mounts are not that stable especially since most of them are designed to be placed on the air vents. Wuteku made their mount work as a dashboard mount with makes it much more stable even while driving or breaking. The iPhone will stay securely in place in most cases.

Pros
Cons
There is not much to complain about the mount except for the fact that some of them do not come with a proper sticky pad to keep it in place. It is true that the dashboard type of the car does play an important role but there are some failed units that managed to slip trough. It is not a cheap mount but it gets the job done better than most other magnetic ones. 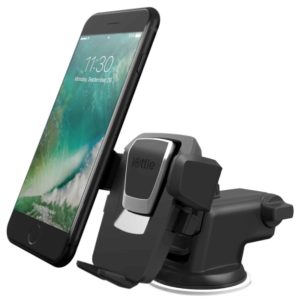 iOttie managed to make one of the safest car smartphone mounts on the market. It is also a bit more expensive but the build quality surely compensates for the higher price tag. The mount was made with a secure system that keeps the phone safe in place and a powerful sticky gel pad that works on any type of dashboard. Even when the car vibrates it will not move from its place.

Pros
Cons
As a dashboard mount, having an adjustable arm is a major plus. It can sustain the weight of the smartphone even when fully extended. It starts to struggle only when it is very hot outside during the summer. Other than that it behaves very well. Washing the pad with water will make it work as if it is new. 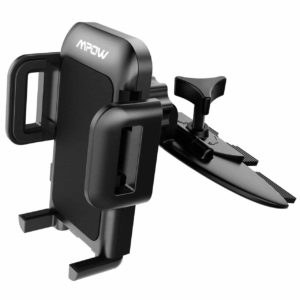 Mpow car phone holder is a simple model and one of the few that was designed to work with the CD slot of the car. This makes it rather secure but it makes the CD tray unusable. However, nobody uses CDs anymore. The unit does have a few useful features and a decent build quality but most importantly it is very cheap.

Pros
Cons
The mount has all the expected features. It can be rotated and secured horizontally or vertically. The clamps that hold the smartphone into place are rubberized and prevent scratches while the springs ensure that the phone will not fall off. It does not have an extended arm but it works great just the way it is. 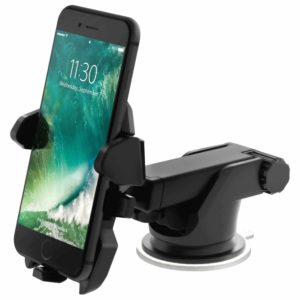 The iOttie Easy One Touch 2 car mount is the original version and the more appreciated one. It can be installed onto the dashboard or the windshield with the aid of its strong suction cup. The arm is adjustable as expected and the mount itself was designed to work with virtually any smartphone, including the iPhone Plus.

Pros
Cons
The fact that it has an extendable arm is a great plus but when fully extended it gets flimsy. It will vibrate a lot but the iPhone will remain securely in place. A big selling point is the fact that it can be installed on the dashboard and windshield. The suction cup is very strong and it should survive intense vibrations.

What Type Of Mount Is Right For You?

It is difficult to tell which mount works better. There are several different types to choose from and some work better than others. Before picking a model it is a good idea to know exactly how many types there are there. They can be installed in various places of the car. Here are all the types listed in just a few words. 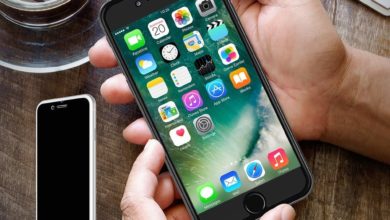 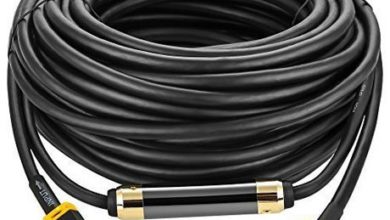 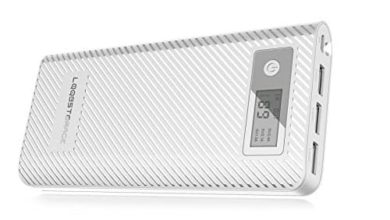 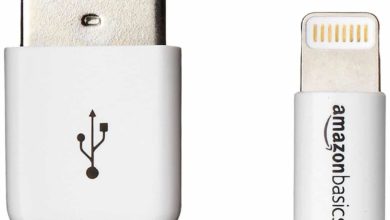