Self-defense is now taken more seriously than ever. Even if violence crimes went down in the past few years, being prepared at all times should be the norm. In time, the number of victims of violent crimes will drop and a good way to do so is to prevent such instances from happening in the first place.

Something that most people should have is a pepper spray. Not everyone is comfortable using or owning a gun. Also, carrying a gun in a public area may be prohibited in certain countries or states. Pepper sprays, on the other hand, are commonly accepted everywhere as a self-defense device that is not dangerous and is not regulated. Almost anyone can get a pepper spray.

Pepper sprays may come in different sizes, shapes, and concentrations. The substances used can vary a bit from one manufacturer to another. As there are so many choices available, we decided to narrow down the list to just 10 different pepper sprays. To keep things short, here are the top 10 best pepper sprays. 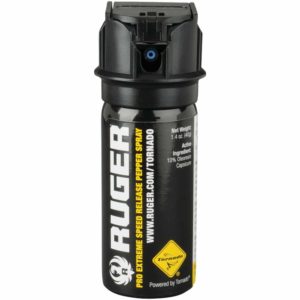 Tornado Pro Extreme pepper spray is a powerful little can that can help avoid a completely bad situation. It is not that expensive and does its job very well. Despite being small, it can spray up to 15 feet away which allows for a safe distance between the victim and the attacker.

The spray uses a mixture with a heat rating of 2 million Scoville units. It is close to the strength used by police enforcement meaning that it will have an instant effect on the attacker. All it takes is one trigger for the pepper spray to release a thick jet.

The canister used is similar to the ones seen in law enforcement. It does not have a lock for the canister and should be handled with care to avoid accidental fires. They can weigh 40 grams.

Defense Technologies OC stream pepper spray is an inexpensive and effective self-defense solution. The new formula uses a higher concentration and it is now completely nonflammable making it as safe as a pepper spray can be.

A canister has a net weight of 3.0 ounces which is enough to give it several uses before going empty. A full spray has a range of 10 to 12 feet and a can should offer about 25 short bursts. The propellant used is Nitrogen.

The size of the can is considered regular. It will fit inside a car glovebox or a small bag. The trigger is very easy to pull and comes with a safety switch to prevent it from misfiring. Its long fire range makes it a good choice for the ones that wish to keep a safe distance between them and the attacker. 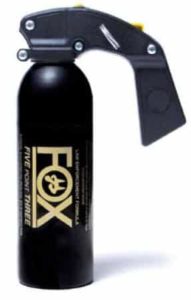 The pepper spray has a 5.3 million Scoville heat units rating. Because of its highly concentrated formula, the pepper spray will have an almost instant effect. It is an inflammatory agent that can cause serious irritation.

The product comes in a 12 ounce can with a secure handle. It has a very long range and can fine a good number of bursts over a wide spread. The can have a small safety lock which ensures that it can be stored safely. Also, it has a 3-year warranty as according to the manufacturers the propellant can get depleted or leak out. 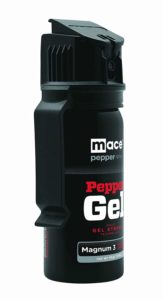 Mace self defense pepper spray is a pocket-sized canister that was made to be easy to conceal and carry around. It is a small 45g can with a highly concentrated formula made entirely out of naturally occurring substances.

The pepper spray is derived from hot peppers. It also contains a special dye that leaves a mark on the target which is meant to make it easier to identify the attacker after an event. The substance inside is thicker than usual which reduces the chances of a blow back.

As for the construction of the can, the pepper spray is very small and has a small belt clip. It also has a safety lock and because it can hold a good amount of pressure, it can shoot up to 20 bursts over a range of up to 18 feet. 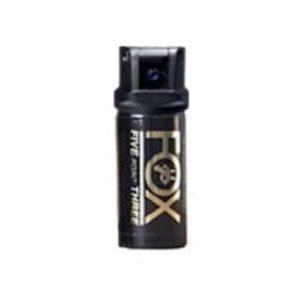 Fox Labs pepper spray is a great self defense tool as it is small and easy to use. It can fit even inside a pocket and with the aid of the flip-top, it will never have an accidental discharge. The pepper spray was made to be safe to use even for the ones that do not usually carry something like this with them.

The can have enough pepper spray for approximately 18 bursts of about half of second each. Stream range can reach up to 20 feet which offers a good distance from the attacker. The formula used is highly concentrated and will immediately stop a potential threat.

In terms of safety, the heavy stream will not blow back. Also, the flip-top ensures that it will not discharge accidentally. It does not have any kind of leaks and it never expires. 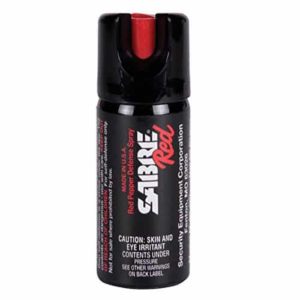 SABRE Red pepper spray is a great option for the ones that need something to fit inside a small purse. It is inexpensive and safe pepper spray that can be used in all types of circumstances, being capable of instantly stop an attacker.

The pepper spray comes in a small can that can handle about 20 short bursts. As for range, it can reach about 10 feet which is quite impressive for such a small pepper spray. The formula uses mainly natural ingredients.

In order for the spray to be safe to carry even in a small bag, it comes with a locking mechanism. The lock prevents accidental discharges. As a bonus, the manufacturers included a small training video in order to ensure that the pepper spray is handled properly. 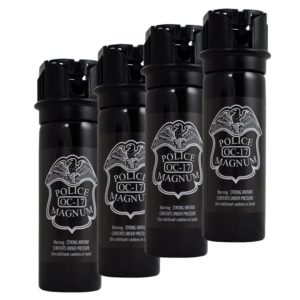 Police Magnum pepper spray with UV dye offers an extra layer of protection when compared with other pepper sprays. It has a special dye that will help identify the tracker easier. It is a UV dye which means that it is not visible to the naked eye thus the attacker will not be preoccupied with removing it.

The substance used in the pepper spray is non-toxic and it is not flammable. It has a good spray range and comes in a compact form factor that makes it easy to carry around.

Like most other pepper sprays, the can comes with a safety lock to prevent accidental discharges. Because it is not flammable, the spray is significantly safer to use. It is still not recommended to be left exposed to extremely high temperatures. 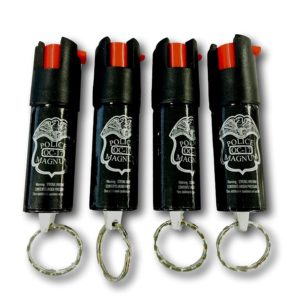 Police Magnum OC pepper spray is one of the smallest pepper sprays that got picked for our list. It comes as a pack of 4 cans with a twist top. Each can weigh 0.5 ounces. They have a key chain ring and are small enough to fit in a pocket.

Like some of the other Police Magnum sprays, it uses a special solution that is non-toxic and non-flammable. It can stop an attacker almost instantly as it has the same strength as the pepper sprays used by police enforcement.

A useful feature is the use of a special UV dye. The dye will help identify the attacker much easier. Because it is a UV dye, it will not be visible to the naked eye. 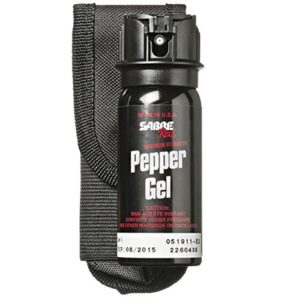 SABRE Red pepper gel is one of the strongest pepper sprays on our list. It has a very powerful formula that can stop an attacker almost instantly. Because it is thicker than regular pepper spray, the range of a burst is 20% greater. It can reach a target that can be up to 18 feet away.

According to SABRE, their pepper spray has one of the lowest failure rates on the market. It also uses a UV dye that cannot be seen with the naked eye, which will help identify the attacker easier.

As for safety, the spray has a good range and comes with a safety lock to prevent accidental discharges. It also has a few links to the packages for some free training videos. The spray has a 4-year shelf life and it is non-toxic. 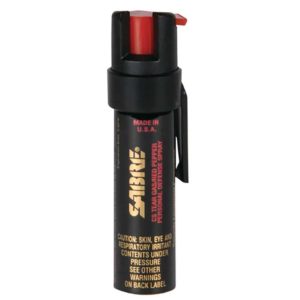 SABRE 3-in-1 pepper spray is the ultimate self-defense tool that will prove to be useful in almost any situation and for virtually anyone. It is a very compact product that can be concealed inside a pocket and has enough power to offer a range of up to 10 feet.

The pepper spray delivers a powerful stream that reduces wind blowback. It also has a twist lock top that prevents accidental discharges. Because of its small size, it can fit in a pocket or it can be secured on a belt with the aid of the clip that the can have on it.

Like with most of their other products, SABRE has added links to training videos on the package of the pepper spray. As for efficiency, the pepper spray uses their most powerful formula to help stop attackers almost instantly.

Pepper sprays can be more than a just self-defense tool. They can also be dangerous. Everyone heard cases in which pepper sprays have fired accidentally or the burst ended up being carried by wind into the eyes of the person using it to defend itself. Some have even proven to be quite ineffective at stopping an attacker.

A good pepper spray needs to comply with several safety standards. Their efficiency depends on several other things besides the concentration of the substance used. Here are a few important factors to take into account:

Out of all the self-defense tools we have available, pepper sprays are the safest to use both for the victim and the attacker. It is all about efficiency and causing the least amount of damage and this is exactly what pepper sprays do. A good pepper spray will have a high concentration formula using non-toxic ingredients that can stop an attacker almost instantly from a safe distance.

These days, everyone can get a pepper spray as they are very easy to find and inexpensive. Our picks include pepper sprays that are known to be reliable and safe to use. Safety is vital which is why all of them have a good spray range and have powerful streams that reduce wind blowback. 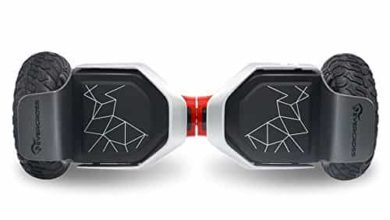 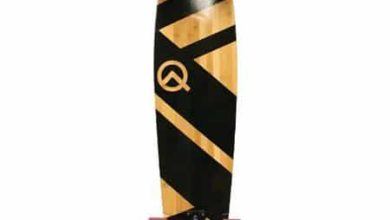 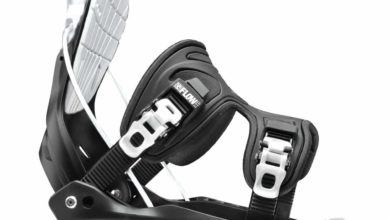