Are you in the market for a small, affordable drone? Often, people who are interested in drones don’t want to spend the money to buy a big drone that they can use outdoors before they have some experience flying them. After all, nobody wants to lose thousand dollar drone.

Nano drones are tiny and are best flown in doors. The risk of losing them is small for that reason. However, it can be difficult to know which drone is best. That’s why we’re here to help. Before we list our favorites, let’s talk about what to look for when you buy a drone.

What Should You Look for in a Nano Drone?

There are a few considerations that you should keep in mind when shopping for a smart nano drone. Here they are:
Size comes first. Most nano drones will fit in the palm of your hand, but some micro drones are a bit larger. You’ll have to decide which size is best for you.

Now that you know what to look for in a smart nano drone, here are our picks for the 10 best available in 2022. 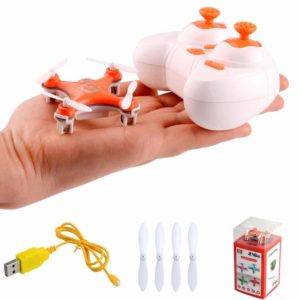 The #10 pick on our list is the Cheerson CX-10 RC Nano Drone. We like it because of its incredibly affordable price – so low that you could buy several if you wanted to. This drone is definitely tiny enough to fly indoors, measuring 2” by 2” by 1”. The motor is quiet. This drone has LED lights for night flying, and it comes with a controller that’s small but comfortable to use, even for people with large hands. It has two speeds and can do a series of maneuvers.

On the downside, this drone runs on a rechargeable lithium battery, and when fully charged, has a flight time of only 4-8 minutes. The drone takes up to 40 minutes so it may make sense to get two if you want to be able to play for longer than a few minutes at a time. Some of the training videos and marketing materials could be better too. All four rotors are the same color, which can make it difficult to figure out your direction. Still, with a bit of practice this is a great and affordable drone. 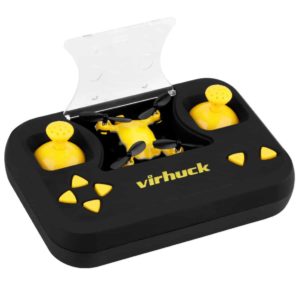 The #9 pick on our list is the Virhuck Volar-360 RC Nano Drone. We like it because in spite of its small size, it packs a punch. It weighs less than two ounces, but it has four motors and a 6-axis gyro system for stability. You can use the included controller to pitch, roll, yaw, trim, as well as rotate 360 degrees. It also comes with headless mode and a one-key return key for easy retrieval.

There are a few potential downsides to consider. First, the flying time is pretty low, only about five minutes with a charge – although it does help that it takes only about 15-20 minutes to charge via a USB connector. Second, finding replacement parts is very difficult and none are included. It’s an affordable drone, but more expensive than the Cheerson. 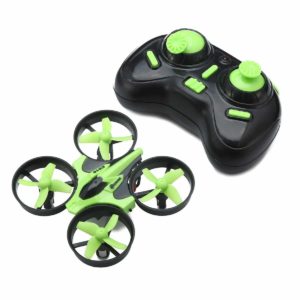 Coming in at #8 is a drone that’s a little larger but can still fit in the palm of your hand, the Eachine E010 Mini UFO Quadcopter Drone. This drone has 6 gyros for stability and can do a 360 degree roll with ease. Each one of the four propellers is set into a duct, and that makes this drone of the most durable on our list. The controllers are easy enough to use that even small children can get comfortable flying one of these with just a few minutes of practice.

On the downside, the flight time of just about five minutes is a bit low considering that it takes 45 minutes to fully charge. However, unlike some other drones the rechargeable batteries are removable, so you can buy an extra set and avoid the waiting. The props are effective but also sensitive – even getting one hair caught in them can bring this drone down. 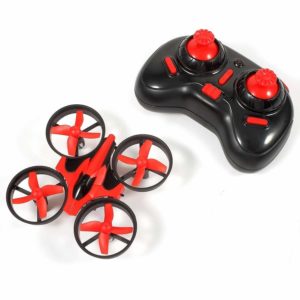 Our #7 pick is the Bangcool Mini RC Drone, which is about 3.5” in diameter and very durable. Like the Eachine, this drone has ducts to help protect the propellers, and is remarkably stable in flight. It can do a cool mid-air flip and unlike a lot of inexpensive nano drones, it comes with headless mode. It also comes with a 12-month warranty.

There are a few negatives to consider. First, this drone is not particularly quiet. You shouldn’t expect to fly it while someone is watching television – at least not without annoying them. It also has a relatively long charging time – 30-50 minutes. Removing the batteries is not as easy as it should be, and kids are unlikely to be able to do it on their own. It can get as much as 7 minutes of flight time if you’re just flying and hovering, but aggressive flying will cut into your flight time. 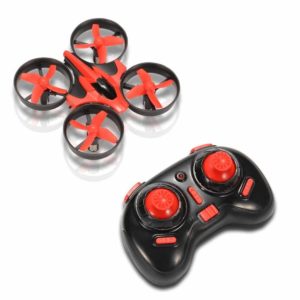 Our #6 pick is the RCtown NH010 Mini Drone. This drone is very stable considering its small size, and easy enough even for small children to use. It can move in any direction and do flips, and the fact that it comes with ducts to protect the propellers and four replacement propellers makes this particular drone a good choice if you’re worried about crashing. It also has one-key return for easy retrieval.

There are a few potential downsides to keep in mind. First, the batteries are removable but finding replacement battery packs is a challenge. You’ll have to wait 30-50 minutes for your drone to recharge once the battery is drained. However, its low price and easy use make it a good choice for beginners. 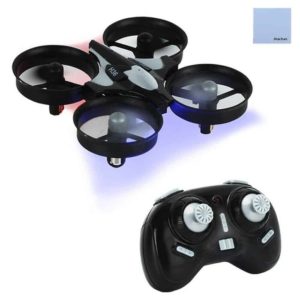 The #5 pick on our list is the JJRC H36 Mini, which is a bit larger than some of other choices but also has some great qualities. We like it because it comes with headless mode and can do a very smooth continuous roll – something a lot of the tiny drones can’t do. It has ducts to protect the propellers, and it doesn’t drift the way some small drones do, so it’s pretty rare to have it crash. The batteries are removable so you can buy extras to extend your flying time.

There are a few downsides to consider. First, this drone may only get about 3 minutes of flying time if you do a lot of rolls and tricks with it. Second, its slightly larger side might make you think you can fly outside, but even a light wind is enough to carry it away. Third, make sure not to remove all four propellers at once to clean them. They all look the same, but the drone won’t work if you put them back in the wrong place. For the best results, remove and clean them one at a time. 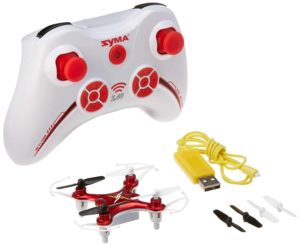 Coming in at #4 on our list is the Syma X12 Mini Nano. We chose it because of its smooth flight, which allows you to do 360-degree flips, barrel rolls, and other tricks. This is a very stable little drone, and it has a voltage warning so that you don’t run out of juice while the drone is in mid-air. It’s got an LED headlight which makes it very easy to tell which way the drone is facing.

On the downside, this drone takes a while to charge, about 40 minutes or so in return for just five minutes of flight time. Even in very light wind it’s not a good idea to use it outside unless you want to lose it. And while the controls are relatively easy to use, this drone may not be the best choice for very young kids since it takes some getting used to. 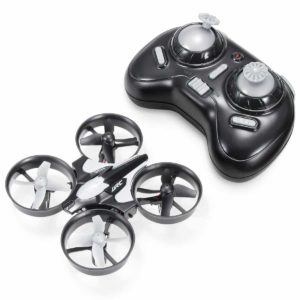 Our #3 pick is the REALACC H36 Mini Quadcopter Drone, and it’s a great one. Not only is this drone easy to use, but it’s also very quiet – unlike some of the others on our list. The soft humming sound is the only thing that gives away its presence. The six gyros make this a very stable drone, and you can use it to easily do tricks and rolls. This drone also has one of the longest flight times of any drone on our list – you may be able to get as much as 10 minutes if you don’t overdo it with the tricks.

On the downside, you may have to do a bit of trial and error to figure out the controls. They’re not difficult, but the instruction manual is poorly written and difficult to understand. Also, it can take as long as 50 minutes to charge, which is a fairly long charge time.

The #2 pick on our list is the NextX F8 Nano Drone, one of the only drones on our list that can truly be flown outdoors as long as it isn’t too windy. It’s extremely lightweight and yet surprisingly durable – you can crash it and not have to worry about it not working thanks to the propeller guard. This drone can get up to 10 minutes of flight time off a single charge.

There aren’t many negatives, but one is that this is not really a toy. Young children will have a hard time mastering it although it’s a great option for ages 12 and up. The blades sometimes stop turning, but removing the blade and putting it back on is enough to get it started again. Like the previous choice, the manual is poorly translated so you may have to resort to trial and error to figure out the controls. 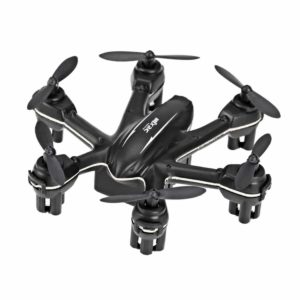 Finally, our #1 pick is the COOCHEER MJX X901 Mini RC Drone. The other drones on our list are all quadricopters, but this one is a hexacopter which gives it great stability and a very cool look. It has 6-axis gyro design and four rotors, which makes it easy to control.

There aren’t many negatives to discuss with this drone, but it is important to note that it’s not for small children. The manufacturer recommends it for ages 14 and up and that’s probably right, although a 12-year old with some drone-flying experience could probably handle it.

Whether you’re in the market for a toy for your kids or just want to try flying a mini drone for fun, the ten models on this list offer fun and functionality at affordable prices. Keep the battery life in mind when you order, and have fun. 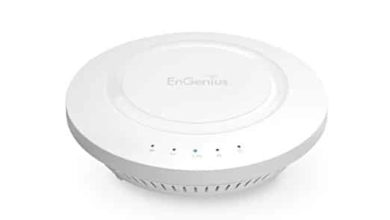 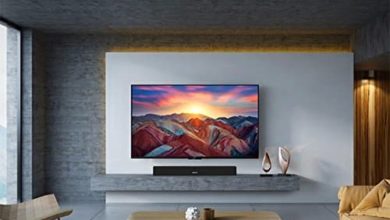 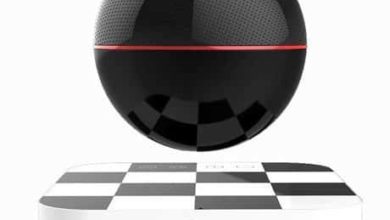 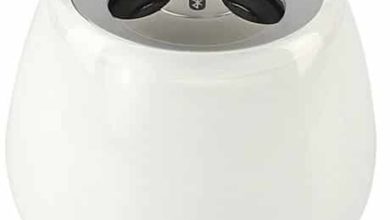