PA systems have been around for many years. As long as people need to be heard by large crowds, PA systems will exist. They are frequently seen in school auditoriums, small bars, churches or even for public meetings in open areas. They are also referred to as sound reinforcement systems. The difference between the two is not very clear. Sound reinforcement systems are mostly used for live music performances while PA systems, as per definition, are used to address an auditorium. From a technical perspective, there is not much of a difference between the two. A PA system can also be used as a sound reinforcement system in certain conditions if it is powerful enough.

Even if PA systems may look like regular sound systems with a microphone, they cannot be used to listen to music. The speakers used are specially chosen for wide distribution of sound and the bass is not very loud. For a regular person, an affordable small venue PA system should be fine. The ones that need a system for a large hall will have to spend much more money. The extra price comes from the amplification of the speakers and the drivers themselves.

For our list, we picked 10 different PA systems that are suitable for small venues. This means that they are affordable and very easy to setup. To keep things short let’s jump right into our list of the top 10 best PA systems in 2022. 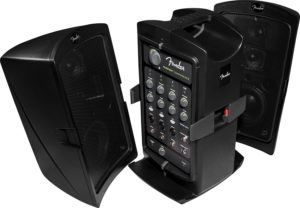 Fender is probably the most popular brand when it comes to guitars but they also make rather decent speakers. Their Passport conference PA system is an ideal pick for small to medium-sized audiences. As the name states it is meant to be used for conferencing. It has a 175-watt speaker system with a five channel mixer and mic input. The system does not include a microphone. It does, however, have an interesting design that allows the user to attach the speakers to the mixer so that it is easier to carry.

Pros
Cons
The system itself is excellent for presenters and public speakers. It was built to be used indoors in order to get the best results. The only problem is that the system is quite expensive and there are plenty of options with systems that are just as good but with a smaller price tag. 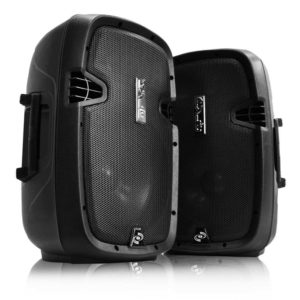 Pyle PPHP1049KT is a great little system for the ones that need an indoor PA speaker. It is a self-powered system with 15-inch subwoofers and a built-in amplifier. The speakers have a peak power of 1000 watts. It has a clamp system that allows for both speakers to be connected so that they are easier to move around. The system can also be used to listen to music and it does not include a microphone. It can read audio files from a USB drive and it supports playback over Bluetooth.

Pros
Cons
The PA system from Pyle is advertised as being a great option for small concerts and karaoke. Unfortunately, the sound quality is not great. Bass is a bit washed up. In order to get the most out of them, it would be better if they are used in parallel with a regular sound system. 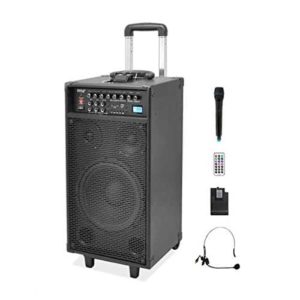 Pyle PWMA1090UI is a great PA speaker sound system for the ones that have a limited budget. It is quite powerful for such a small system and it is more than suitable for a medium-sized room. The peak power of the speakers is 800 watts and has a built-in battery that offers about 3 hours of playback. For the kit, a remote has been included. As a bonus, it comes with a lavalier headset and a wireless microphone.

Pros
Cons
The 800-watt peak power is not that much. It is PMPO wattage and not RMS. This means that they have an RMS wattage of about 80 watts which is not that much. It will not be loud enough for a large room. The PA system is meant for small audiences no larger than 50 people. 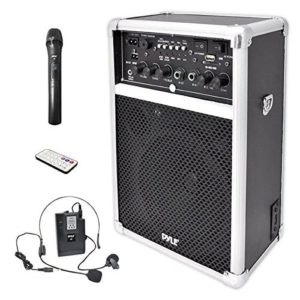 The Pyle PWMA170 is one of the more affordable devices on our list that offers decent quality without having a steep price tag. It looks like a classic amplifier and it offers plenty of features. It has a microphone input, guitar input and plenty of audio controls for the main channel. The speaker has a peak power of 400 watts which is not that much but it does include a small remote and even a wireless microphone.

Pros
Cons
400 watts as peak power rating is not that much. It is the kind of PA system that can only be used for small rooms with no more than 50 people. The advantage comes from the fact that it is a cheap system and the sound quality is quite decent especially since it has controls for echo, treble, and bass. 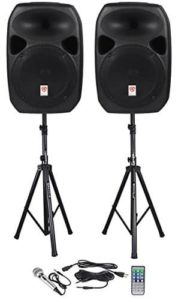 Rockville RPG122K comes as a complete for PA system that has a wide range of applications. It is quite loud as it offers 250 watts RMS. The speakers have a built-in amplifier and include a microphone. In terms of features, the system has a built-in FM radio, SD card reader, and a wireless remote. The kit is not very expensive and it is very easy to set up. It includes all the required cables and two speaker stands.

Pros
Cons
For a PA system, the bass is just too loud. It seems like the drivers used are more suitable to listen to music. The sound quality can be tuned using a separate mixer and reduce the bass levels even further than what the remote allows. 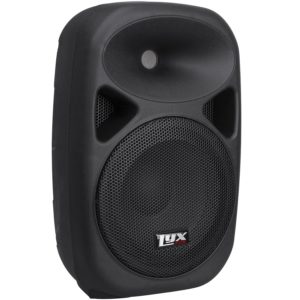 LyxPro SPA-8 is a portable PA system with a single yet powerful speaker. The system offers 100 watts RMS which is good enough for a single speaker and should be loud enough for a small to medium room. It was designed for indoor use and comes with a few extra features. The system has an SD card reader, USB input, Bluetooth support and a built-in equalizer. Unlike other systems, it does not include a microphone but it supports multiple types as it has XLR input, AUX, and RCA.

Pros
Cons
The built-in amplifier is not that great. It makes the voice sound a bit muddy and unnatural. This can be fixed by using a mixer or external equalizer in order to tweak sound directly from the microphone. The good part is that the LyxPro is not that expensive and it works great with even the cheapest mixer.

Pyle PWMA200 offers great value for the money. It is one of the most inexpensive PA systems on our list and comes with everything needed. The kit includes a small portable speaker with rechargeable batteries, a microphone and a wireless receiver for the microphone. It also supports a regularly wired microphone and it includes a charger for the speaker. The system is not very loud but it should be good enough for small audiences.

Pros
Cons
When we say that the product picture is not very accurate we are actually talking about the microphone. The microphone in the picture is not the same as the one that comes with the kit. It is still a decent microphone but it is a different model which is a bit deceiving. It should not be something concerning but it is annoying. 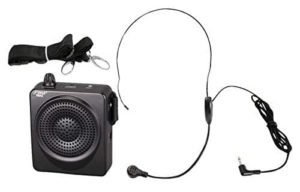 Pyle Pro PWMA50B is one of the most compact products on our list. It was designed to be portable and affordable. It comes with a complete kit that includes the speaker, a small headset, and a strap. The speaker is battery powered and can be recharged. The microphone quality is decent and the small speaker is loud but not very loud. According to the manufacturers, the speaker has a projection range of up to ½ mile and can be fully charged in about 6 hours.

Pros
Cons
Despite having a decent projection, the speaker is not very loud. It can get covered by ambient noise quite easily. It is best if it is used indoors and for small audiences otherwise the volume of the speaker would seem very low even if it is quiet. 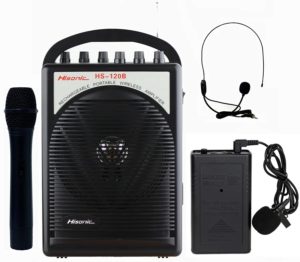 Hisonic HS120B manages to be a rather reliable portable PA system. It is surprisingly powerful for its size and can run for several hours on a single charge. It is a 40-watt speaker system with a wireless microphone system and sound controls on the top. The model is quite inexpensive but delivers great sound quality and it is quite loud. It includes a one year warranty and works straight out of the box. The only thing that needs to be done is to charge the device.

Pros
Cons
Most portable PA systems have a built-in battery that tends to last for at least a couple of hours. Because the Hisonic uses a rather powerful speaker, the battery gets drained quite fast. It will not last for more than two hours on a full charge. 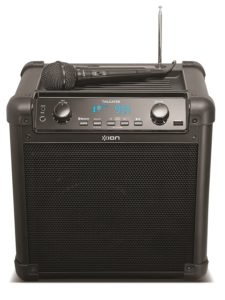 ION Audio Tailgater iPA77 is a great pick for the ones that do not want to spend a lot of money. It is inexpensive and well made. The model is battery powered and supports audio over Bluetooth. According to the manufacturers, the speaker has a built-in battery that offers playback for up to 50 hours. It has an FM radio, auxiliary inputs and it includes a microphone. The speaker also works as a power bank and can charge any smartphone or mobile device.

Pros
Cons
For such a compact and inexpensive device, the PA system is loud and easy to carry. The sound quality is quite impressive and the controls allow the user to tune the speaker as needed. The model works with most mobile devices and has a very stylish design.

There is no general rule when it comes to picking a decent PA system. They are different based on the quality of the drivers, the amp and the microphone included. Also depending on their power, they might be suitable for certain audience sizes. To keep things simple we have highlighted below the most important aspects. 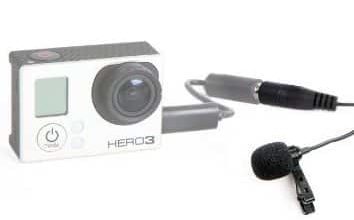