Ingersoll Rand has a very long history. It is one of the oldest companies that started as a simple American drill company. Originally, the company was founded in 1871 and its main activity was the manufacturing of large drills used in the construction of water aqueducts. As years passed by, the company suffered many transformations, acquisitions, and diversification of products. They now have several different brands and subsidiaries. The one that still wears their name, Ingersoll Rand, is known as a brand of air compressors, tools, and material handling devices.

For the most part, Ingersoll Rand makes air compressor powered tools. Over the years, the brand managed to build a solid reputation amongst professionals and regular folks that need tools such as the ones built by Ingersoll Rand. They have lots of different products and all of them are made to be durable and functional. At the same time, they are not that expensive which is a major plus. The company focused on delivering quality at affordable rates. For our list, we selected 10 different tools that can handle various tasks. Most of them are powered by an air compressor but there are some that work on batteries as well. This includes cordless tools, cutting tools, impact tools and some power tools.

Here is what we deemed purchase worthy out of their entire range of products. With no further ado let’s get right on our list of the top 10 best Ingersoll rand products in 2021. 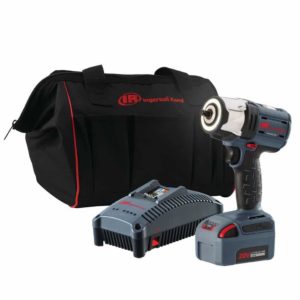 Ingersoll Rand W5132-K12 IQv20 is one of the few cordless impact tools in their lineup. It was made to deliver 50% more torque than a regular impact wrench while still offering the freedom of a battery powered tool. It has a maximum of 550 foot-pound torque using a high durability motor and a matching rechargeable battery. The kit also includes a charger for the battery and a protective pouch. The tool offers 4 different running modes and can be found in two different sizes.

Pros
Cons
For such a compact cordless tool, the IQv20 is quite heavy. This makes it difficult to use it continuously for more than 15 minutes. The battery will not last that long either. The weight of the tool comes from the fact that the battery pack is quite heavy and the body of the tool is mostly made out of metal. This does make it durable but it adds a lot of weight and that can be a problem for a cordless tool. 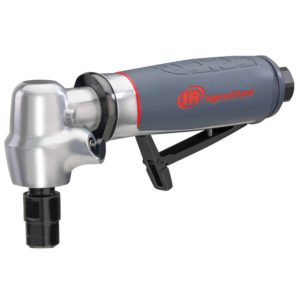 Ingersoll Rand 5102MAX is one of the more compact air compressor powered tools in our list. It is quite compact with a body made mostly out of metal and a 0.4 HP motor that is capable of delivering up to 25,000 RPMs. For extra safety, the air die grinder has been fitted with a safety release throttle. Also, to ensure durability, it was made only with ball bearings. One aspect that many might not think much about is the fact that the tool has very low noise levels. It also does not vibrate that hard compared to other similar models.

Pros
Cons
Even if it is a rather powerful piece of machinery, it is not without flaws. For some strange reason, the motor gets stuck often. In order to get it working again, the disc needs to be rotated manually to get the motor unstuck. It is easy to do but it is annoying.

A ratchet is the kind of tool that everyone should have around. The Ingersoll Rand 1105MAX is a very powerful tool. It is a high torque air ratchet with a speed of 300 RPM and a very durable construction. The model is very compact and was designed for intense usage. It allows the user to reverse the rotation and has a very ergonomic handle making it easier to use. Because it is so compact, the tool makes it easy to reach confined spaces and narrow areas.

Pros
Cons
Even if it is a compact tool and it was designed to reach tight spaces, because of its weight, the ratchet is a bit difficult to handle. 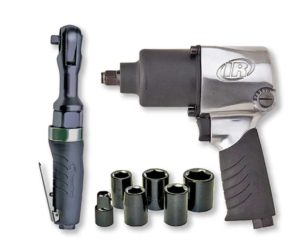 For the price, the Ingersoll Rand 2317G offers excellent value for money. The kit consists of a regular ratchet and an impact tool. Both are air compressor powered devices. This means that they have a very durable construction and they can endure even industrial usage. Both items in the kit are relatively small and require very little maintenance. Also, both have an ergonomic grip and offer excellent stability and low vibrations.

Pros
Cons
Despite being compact, neither of the two tools in the kit are at least reasonably lightweight. They are quite heavy since they are made mostly out of metal. This does make them quite durable but it sacrifices the weight of the tools. Using them for more than 15 minutes can be quite difficult. 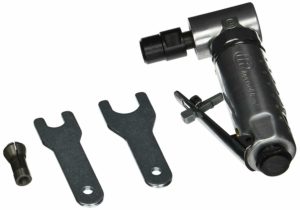 Ingersoll Rand 301B is an affordable and easy to use angle die grinder. As with most of their other tools, the 301B is an air powered machine. Due to its design and scope, the grinder is recommended mostly for maintenance and automotive maintenance. It was made to be quite durable and long lasting with the use and high-quality ball bearings and steel gears. Inside the kit, multiple tools have been included to help adjust and clean the grinder.

Pros
Cons
Unlike some of the other offerings from Ingersoll Rand, the 301B is a rather loud machine. This is mainly because of the front exhaust. While the exhaust does serve a functional purpose which is to keep the working surface clean, it also makes a lot of noise. 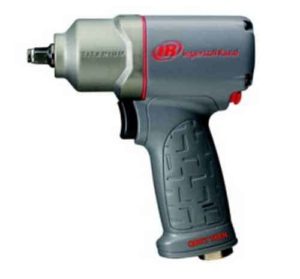 Ingersoll Rand 2115TiMAX is a great tool despite its higher price tag. While some might be looking for a cheaper model, the ones that are willing to spend the extra money will not be disappointed. It uses a 7 vane motor and distributes even more power. It provides 300 ft-Pound of torque and has a reverse position feature. All the controls are very easy to operate and placed carefully so that they are not pressed accidentally. Last but not least the tool has reasonable noise levels and it is surprisingly lightweight.

Pros
Cons
Not everyone will be willing to pay the price for a 2115TiMAX. For a simple user, it might not be worth it but for the ones that plan on using it intensively, it is a much better choice than the cheaper alternative. The high price tag translates into more power and parts with increased durability. 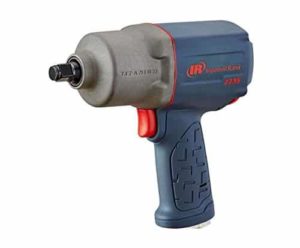 When it comes to high durability impact wrenches designed for industrial use, very few are close to the Ingersoll Rand 2235TiMAX. It is capable of delivering up to 1,350 ft-pound of torque. This makes it one of the most powerful models on our list. It has a four-position regulator to adjust the torque and a twin-hammer mechanism. The housing of the model was designed to ensure it will last even when used for commercial applications. The hammer case is made out of titanium while the steel wear plate ensures long-lasting durability. Last but not least, the model is surprisingly compact and very easy to operate even with just one hand.

Pros
Cons
Such a beast of an air impact wrench needs to have a very sturdy construction. This means as little plastic parts as possible. In terms of usability, an impact wrench is a heavy tool. All the metal parts add up to a heavy but very durable and long lasting tool that will prove to be more than useful in a car shop. 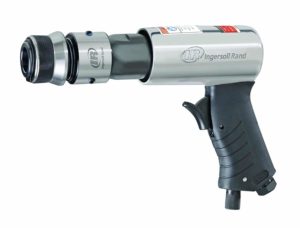 The Ingersoll Rand Air Hammer is probably the most friendly model in our list in terms of pricing. It offers great value for money and decent reliability. It is a 3-piece chisel set. The model is made of steel barrel and a heat treated piston. This should make it durable enough for regular usage. The grip of the model was designed to be ergonomic while the overall size and weight of the air hammer make it very convenient and easy to use. The chisel has a quick change system which counts as another plus.

Pros
Cons
Compared to the more expensive models in our list, the Air Hammer 114GQC is not as powerful. It was not built for industrial usage and thus it is not as durable. It was mainly built for regular user and day to day activities that do not require extremely powerful tools. 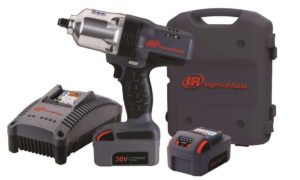 The ones that like something more portable, the Ingersoll Rand W7150-K2 Impactool kit will prove to be a great option. Inside the kit, users will find the tool itself, two batteries, a charger and a case for everything. According to the specifications of the model, it can deliver 1,100 ft-pounds worth of torque. It is a properly balanced tool with an ergonomic handle and a large battery pack that ensures it will run for quite some time before needing a charge. The tool can have its torque adjusted. It uses an all-metal drive train and mostly metal parts for the housing.

Pros
Cons
Not everyone will be able to afford this beast. It is extremely powerful for a battery powered tool. This also means that it is quite heavy as the battery just adds more to the body of the tool. For the price, the tool will best serve someone that needs it on a daily basis. 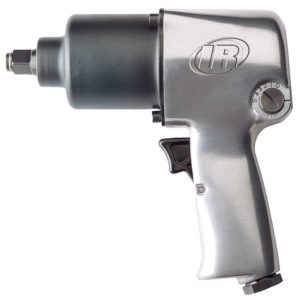 The Ingersoll Rand 231C is a great pick for the ones that need something powerful that they can use at home. It is an air impact wrench capable of delivering a torque of 600 ft-pounds. The tool is made almost entirely out of metal which means that it is a bit heavy but still comfortable to use. In terms of maintenance, the wrench comes fully lubricated and it is ready to use right out of the box.

Pros
Cons
The Ingersoll Rand 231C does exactly what it claims. It is a mid-range air impact wrench that is not durable enough for commercial use but it is good enough for a regular user. It delivers plenty of power and it is very easy to operate and maintain.

Which Ingersoll Rand Toll To Pick?

It can be difficult to decide which tool to get from the entire lineup from Ingersoll Rand. There are key differences between them and pricing can vary a lot. Here are some important things to take into account: 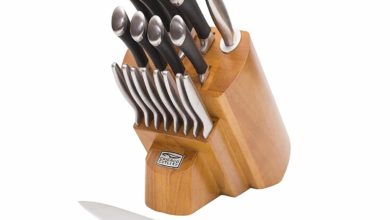 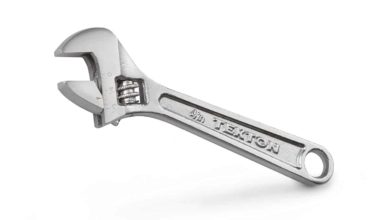 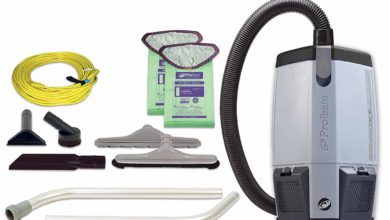 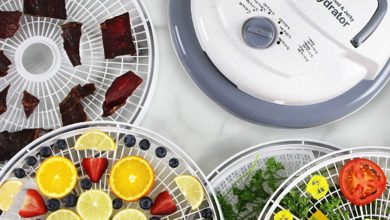