One of the most exciting things about buying a GoPro is that you can use it to take pictures you would not otherwise be able to get. In fact, if you have the right accessories, the GoPro can help almost any amateur photographer get shots worth of a professional.

Drone technology means that you can attach your GoPro to a drone and get great overhead shots. The possibilities of shooting from different perspectives are almost unlimited. Of course, some drones are better than others. So before we talk about our picks for the best GoPro drones available, let’s talk about what to look for in a drone.

What to Look for in a GoPro Drone

Now that you know what to look for in a drone, let’s reveal our picks for the best GoPro drones available. 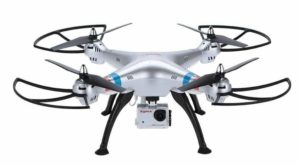 Our #10 pick is the headless quadcopter from Syma. This is a reasonably priced drone that comes with a digital video camera included. However, it also fits the GoPro. We like it because it has a six-axis gyro system to give it good stability. It has several modes of operation, including hovering mode, 360-degree mode, and headless mode. The blades have a plastic coating to protect them from damage.

In terms of the things that could be better, there are a few worth noting. First, this drone has only about a 12-minute flight time before it needs recharging. That’s enough for most beginners but may be a bit disappointing for serious filmmakers. It also takes about 200 minutes to charge fully. The included camera is not a very good one, although some people may like to have a back-up. 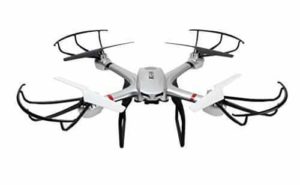 The next GoPro drone on our list is the Ionic Stratus Drone Quadcopter. This is another good beginner model for people who want to play around with a drone without making a big investment. The drone has a versatile throttle that you can use to do 3D flips and other tricks. It comes with headless mode, and it’s pretty easy to operate. That, combined with its affordable price, make it an attractive option for beginners.

On the downside, this drone does not have a gimbal included. That means that the footage you shoot may be a bit shaky. It also has a relatively short flight time (about 10 minutes) and range (about 150 meters). However, it does come with a battery if you want to extend the flight time. All in all, it’s a good drone if you don’t want to spend a lot of money.

Coming in at #8 on our list is the XIRO Xplorer Drone Quadcopter, which costs a bit more than the previous drones but also has some pretty sophisticated features. First, it’s very easy to get started – all you need to do is charge the battery, attach the propellers, and turn on the remote. Next, the battery has a long life – this drone will fly for as long as 25 minutes on a single charge, and has a range of 600 meters. It also has a mobile app you can use to preview your pictures and a return to home feature for easy retrieval.

There are a few cons to keep in mind. For example, the arm on the gimbal is plastic and a bit fragile, so you’ll have to be careful when attaching your GoPro. There is a bit of a “fish-eye” effect when shooting with a 1080 camera, but you can fix it with available software. Finally, the price of this drone is not low, but it has enough great features to make it worth the money for many people. 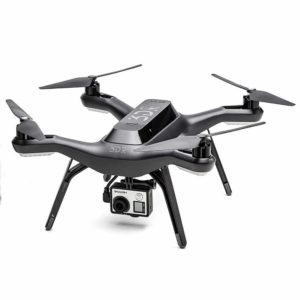 Our #7 pick is the 3DR Solo Drone Quadcopter. We like it because it comes with a bunch of extras, including a hard carrying case, a gimbal, several props and an extra battery. It has a video game-style controller that is easy to use and will be familiar to anybody who’s used a gaming system. You can use the controller to turn the drone or pause it in midflight. It’s got a pretty decent battery life of 20 minutes, and a range of 800 meters. Considering everything you get with this drone, the price is very reasonable.

On the downside, there are a few things to keep in mind. First, the flight time of 20 minutes is a bit low for the drone’s range. Second, 3DR eliminated its telephone tech support option, which means that you’ll have to stick to online or email support. Finally, some people have reported issues with getting a GPS signal, but that may have more to do with where they’re flying it than with the GPS itself. 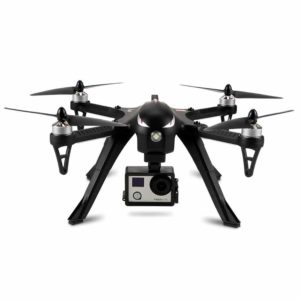 The #6 pick on our list is the Brushless Motor Quadcopter-Bugs3 Drone. We like it because the brushless motor keeps this drone from overheating, prolonging the battery life. Most drones at this price point only get about 10 minutes of flight time from one charge, but this one gets 18 minutes with a range of 300-500 meters. It has bright LED lights for night flying and a warning feature to let you know when the battery is running low.

There are a few potential cons to keep in mind too. First, the two-way communication loses effectiveness the farther away the drone gets, so you’ll have to keep that in mind. Second, the remote doesn’t allow you to manipulate the gimbal so there’s a limit to what you can do with the camera. Still, for the price, this is a good drone that gives you more flexibility than some of the other low-priced options. 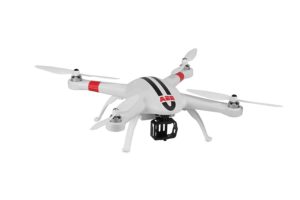 The #5 drone on our list is the AEE Technology AP9 GPS Drone Quadcopter Aircraft System. We chose it because of its sturdy construction and versatility. This drone can travel at a maximum speed of 44 miles per hour, and its cruising speed is 22 mph so you can get some great aerial footage using it. The battery will last about 25 minutes when fully charged, and it has a range of 500 meters. It’s wind-resistant, reasonably priced, and comes with a return home feature for easy retrieval.

On the downside, this drone requires some technical know-how to make the pre-flight calibrations that are necessary for optimal performance. The other major issue with this drone is that it lacks a gimbal so it can be a challenge to get steady footage, particularly when the wind is blowing. You’ll have to balance your particular needs and know-how against the price to know if this drone is right for you.

Up next at #4 is the Holy Stone F181 Quadcopter Drone. This is a very affordable model. It comes with a camera of its own but it can be adapted for the GoPro. It also includes four speeds ranging from 25% for beginners who need to learn how to use it up to 100% for experienced users. The hover function and flip function are easy to use and offer some versatility. The battery charges in just 80 minutes.

On the negative side of the equation, this is a limited drone in some ways. It charges quickly, but the flight time is only 7 to 9 minutes. It also has a limited range, maxing out at about 100 meters. The included camera doesn’t take great pictures, but if you use it with a GoPro you’ll get better results.

Our #3 pick is the Traxxas Aton Quadcopter. There are a lot of reasons to love this drone. For example, it has a dual GPS system so that you always know where it is. It also comes with air brakes for making quick stops, and a return to home feature for easy retrieval. The Traxxas has a race mode that allows it to travel up to 50 miles per hour plus a cruising mode for photography. Fully charged, the battery will give you a full 15 minutes of flight time at a range of about 300 meters.

There isn’t much wrong with this drone, but here are a few things to consider. The GPS may be a bit glitchy at times. Also, the battery may become swollen and stop working if you leave it out in the sun or store the drone fully charged. However, as long as you’re cautious with the battery this is a great drone that can do quite a lot for the price. 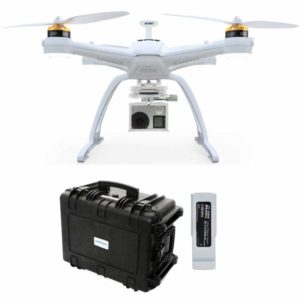 The #2 drone on our list is the Chroma Bind-N-Fly Drone. We like this drone because it comes with a GoPro ready camera mount. The battery life is longer than most – the manufacturer claims 30 minutes, but in use it’s closer to 25, which is still impressive. It allows you to set flight parameters so you don’t lose sight of your drone, and it has both beginner and advanced modes.

The major downside of this drone is that while it comes with a GoPro mount, it does not include a gimbal. You’ll have to buy one if you want to have better control over your camera. It’s also on the pricy side, but it’s worth it if you want a reliable drone with a long flight time. 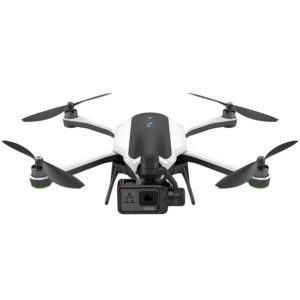 Finally, the #1 drone on our list is the GoPro Karma. This drone is the cream of the crop when it comes to GoPro drones. It’s compatible with the HERO5 camera, and it comes with the Karma Stabilizer, which ensures clear, steady shots whenever you use it. With a battery life of 20 minutes and a full, one-kilometer range, this drone is definitely the cream of the crop.

We like almost everything about this drone, but the one thing you may balk at is the price. It isn’t inexpensive, but it is also the best GoPro drone that money can buy.

If you’re in the market for a GoPro drone, the 10 drones on this list are sure to include something for you. The primary considerations to keep in mind are the battery life, flight range, stability, and whether the drone you choose includes a gimbal for the GoPro or you have to buy one separately. Choose the one you like best – and get ready to have some fun! 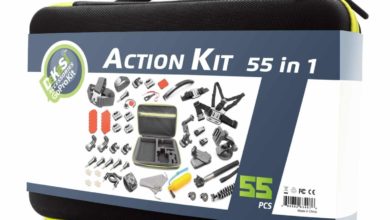 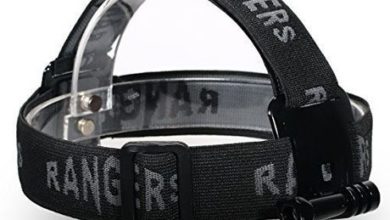 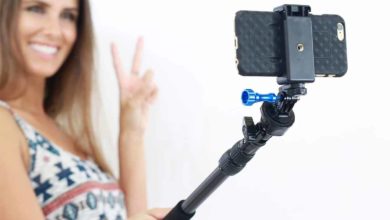 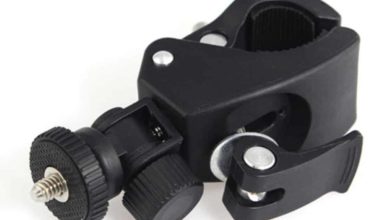